I've been traveling a lot lately to Switzerland, twice getting really close to the Matterhorn after our dear star was hidden from sight by the edge of the Earth. Enjoying the cold, I took a few pictures, out of which I like this one best. 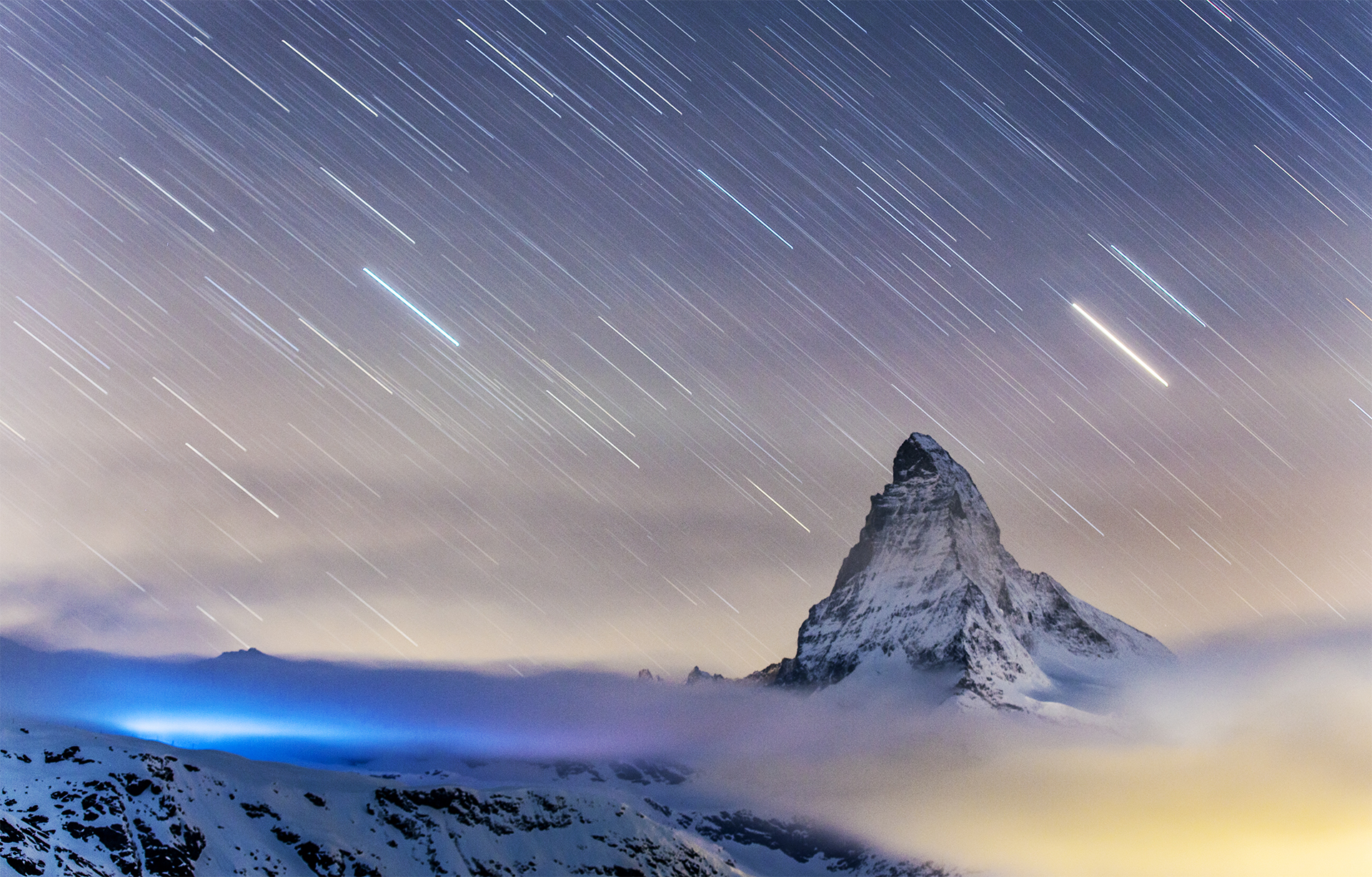 NGC 660 is a polar ring galaxy, found about 20 million light years away towards the constellation of Pisces. Polar ring galaxies are named as such as a substantial proportion of the stellar population, gas and dust orbit the galaxy in rings. These rings are thought to be created by interaction with a neighbouring galaxy.

This image was obtained in late September 2013 as part of the first light tests for the new Prime Focus Imaging Platform (PFIP) mounted on the 4.2m William Herschel Telescope. The false color image is composed of a total of ~40 minutes of Johnson-Bessel BVR data. 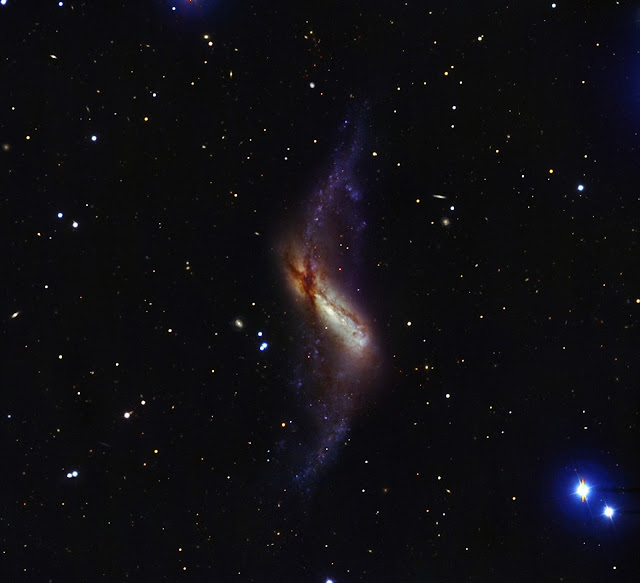 Supernova in M82: SN 2014J It's a quite important supernova, as it could shed light on some issues that these cosmic standard candles have. Too bad it has a lot of dust reddening, which complicates matters a lot.

Having a look a the AAVSO light curves, I'd say that it won't be brighter than 9.5m at maximum, but let's see!

Here's the image taken with our 0.5m rooftop telescope in Bonn, at the Argelander Institute for Astronomy: Startrails in the Canaries

A few months ago I decided to look through my images from the Canary islands that I took during the past couple of years and make a few star trails out of them. Below are the selected four:

The western view from the INT 2.5m telescope terrace. Moon, Venus and Jupiter are the three brightest streaks in the image. An observer's car illuminates the road in red. 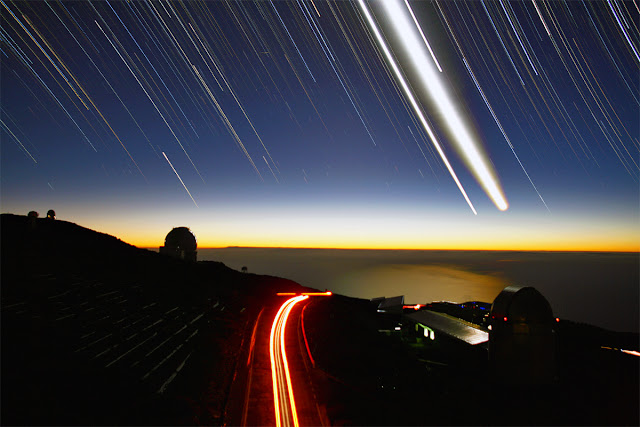 Mount Teide reigns in the left part of the image, while Venus and Jupiter set in the early twilight. For the cities below, the night has already arrived and the street lights illuminate the clouds from below. 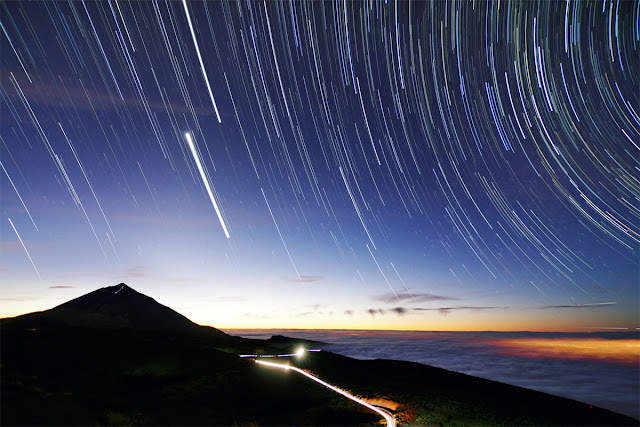 Back to the island of La Palma, the MAGIC telescopes scan the skies for Cherenkov light cones, while the Moon high in the sky illuminates the landscape. 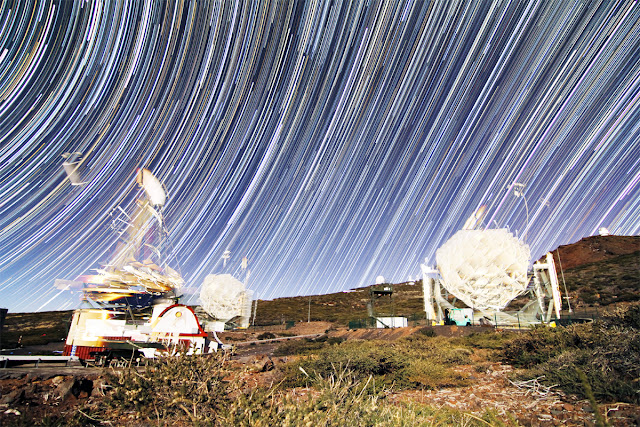 The final set of trails comes from near the top of the Teide Volcano in Tenerife. I love how the road is visible due to the (very few) passing cars and how a little bolide (at least -5m!) decided to show up near the lower right of the image. 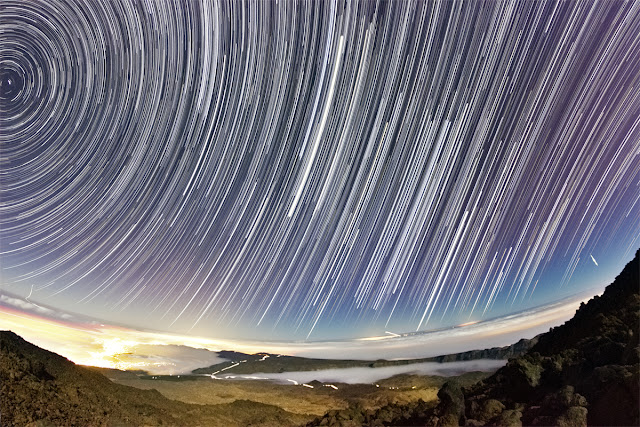 Posted by Alex Tudorică at 13:56 No comments:

Flights and tall buildings or mountains are some of the best ways to see a different class of atmospheric optical phenomena, namely those which lie opposite to the sun. In the images below, diffraction in the cloud droplets produces a multi-ringed glory that surrounds the shadow of the airplane. 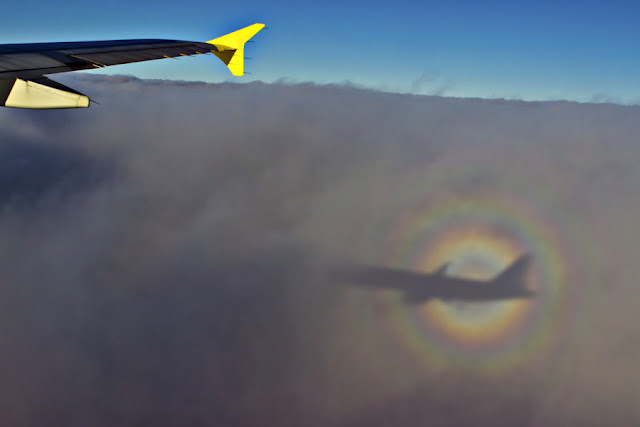 With the clouds slightly farther away, the shadow of the airplane gets smaller in respect to the size of the glory, which remains roughly constant. 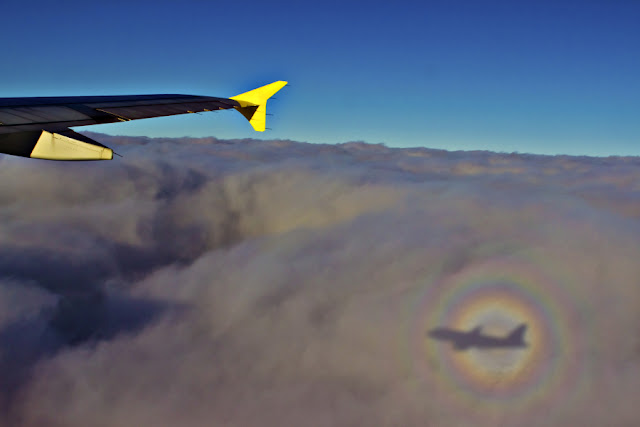 Sometimes, when one can see a glory, the conditions are right also for producing a cloudbow (a type of fogbow) farther away from the airplane's shadow. A few supernumerary arcs are also visible in the image, on the inside of the main cloudbow arc. 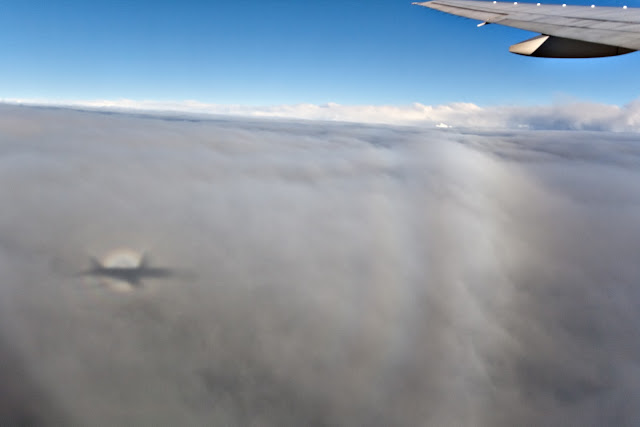 Some similar images of mine were published as the Optics Picture of the Day some time ago.

Although I'm a quite avid atmospheric optics observer, I rarely have to look down to see such phenomena. However, on a flight I took not too long ago, I was fortunate enough to see a few rare halos.

The interesting thing is that the subhorizon halos are like a reflection of the those above the horizon, and the very cool thing about it is that this reflection actually takes place inside the ice crystals that create these optical phenomena in the first place (on a lower horizontal plate).  However, the sub- and over-horizon halos are not perfect reflections of each other.

I'm just very happy that I saw them: 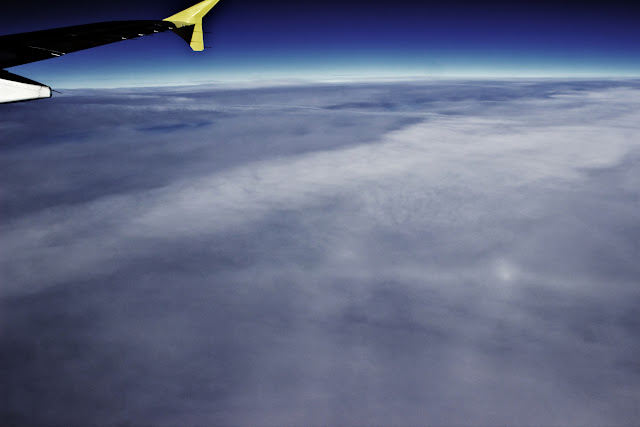 Posted by Alex Tudorică at 13:08 No comments:

In most of my fields for the PhD project I'm currently most involved in, there are lots of weird and interesting objects, most of them probably unknown, at least to the general public. However, from time to time I stumble upon gems such as the 400 million light years distant Tadpole galaxy: 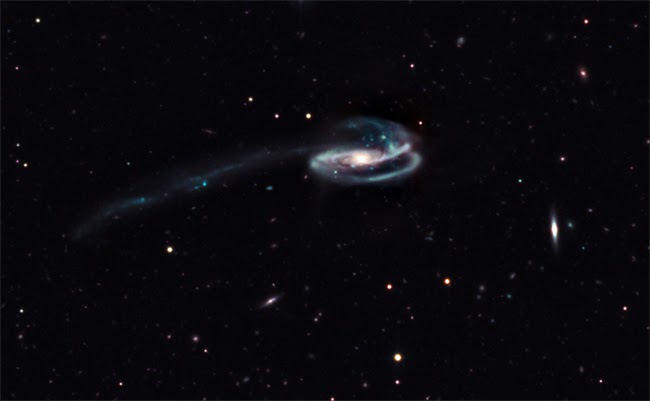 Check out a high quality version on my Flickr account.
Posted by Alex Tudorică at 14:37 No comments:

About one year ago we discovered that our 0.5m Cassegrain rooftop telescope can be used in prime focus mode, but until now I had little time to revisit a wonderful galaxy, M33.
There are many star forming regions visible in the Hydrogen alpha image (red in the image below), king of all being NGC 604, a nebula far larger than our familiar Orion Nebula.

Prime focus, 4 nights of imaging, RVBHa, about 2.5h per filter. 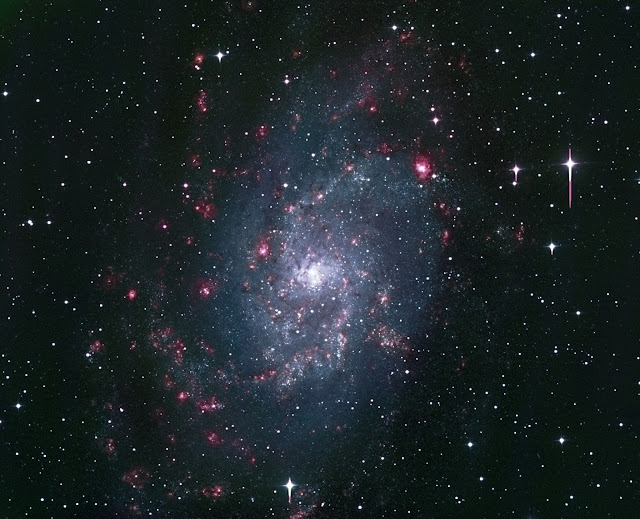 And the old, Cassegrain focus version, about 12h of exposure time in total, LRVBHa: 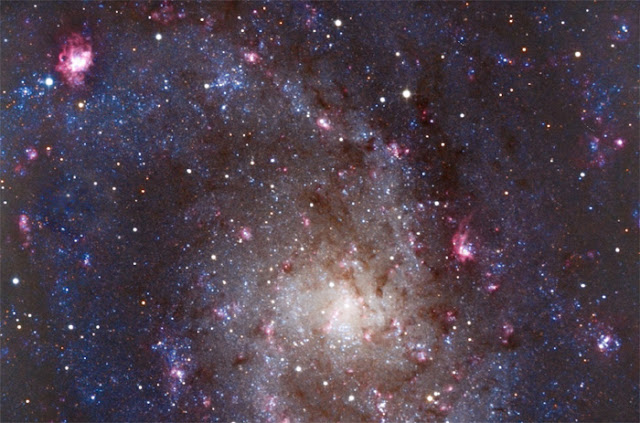 Posted by Alex Tudorică at 21:31 No comments: