The bolides of Teide

After ascending to 3100m to Tenerife's Pico Viejo on last Saturday (10th of November) and descending at night, the whole party of five was quite tired (after all, the sign at the beginning of the path was marked with the "Extreme difficulty" distinction). We laughed in the face of danger. Although the initial plan was to spend the night under the stars together, the others gave in to thirst, hunger and tiredness but I could only ask them to leave me closer to the Teide Observatory: it was a night close the Taurid meteor shower maximum and some bright meteors were promised. At least for my effort I should of been a bit rewarded.

So, they brought me to within 1 km of the observatory and packed me with blankets, warm clothes and the rest of the food and water, leaving me alone in starlight. Fortunately, Etienne was a great guy and promised to pick me up in the morning, otherwise I was supposed to walk about 10 km or so to the main road and take the bus at 16:00 back to Puerto de la Cruz. And he did, so I got a lot more sleep on Sunday :)

I was initially planning to take a long time-lapse, until dawn, but when I went to check the camera after some time I realized that some clouds/fog (basically the same thing there) passed by and ruined the whole idea. Scanning quickly through the images revealed though that the fireball (bolide) I barely saw some time earlier was indeed in one of the images. Oh, joy!! It is probably the brightest meteor I have ever photographed and I used for that a 8mm fisheye lens at 5.6, ISO 1600 on a Canon 600d and 45s exposure time. 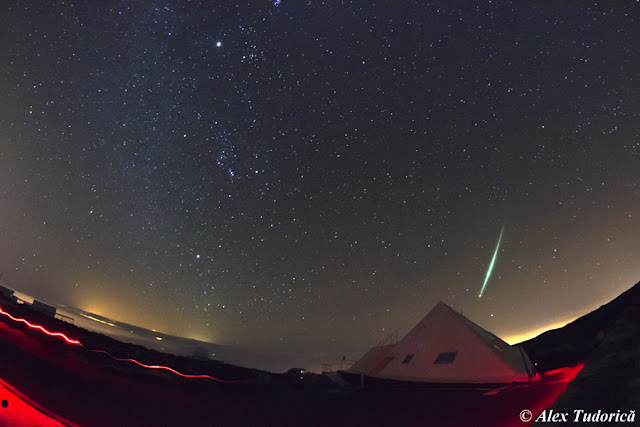 Today I played a bit with the lightcurve and reached the graph below. I took a 58x670 pixels crop of both the meteor and Castor and Pollux, plotting on the X axis the pixel number and on the Y axis the values in counts of all the 58 pixels of the line perpendicular to the meteor trajectory and the Castor-Pollux line.

Then I averaged the values of the three CCD channels (RGB) and multiplied the result with 256, for convenience. The red shows the meteor lightcurve and the black the spatial lightcurve of the two standard stars used, Castor and Pollux.

After performing a little statistical analysis of the values I equalized the backgrounds of the meteor image and of the standard stars to have the same zeropoint and therefore a meaningful comparison. Calculating the FWHM of the stars in pixels which allowed the transformation to arcminutes, using the pixel scale of the camera-lens combination.

Assuming an angular velocity of 15 degrees per second for the meteor, it is then possible to calculate the time the meteor took to cross 3 arcminutes.  As the flux ratios of Castor and the maximum brightness of the meteor seem about the same, the ratios of the exposure times/3arcminutes should give us the flux ratios.

The meaning of the values cited in the figure are: V is the pre-atmospheric velocity (km/s), the elevation h_b (degrees), the altitude H_b (km) of its start point, and the angular distance between its end point and the radiant D (degrees).

As I mentioned I barely was it and it seemed quite (angularly) fast to me, so an Andromedid label is excluded and the Taurid origin is out of the question also from the track orientation, at least at first sight.

And that's how I got an approximate magnitude of -8.5m for this fireball :) 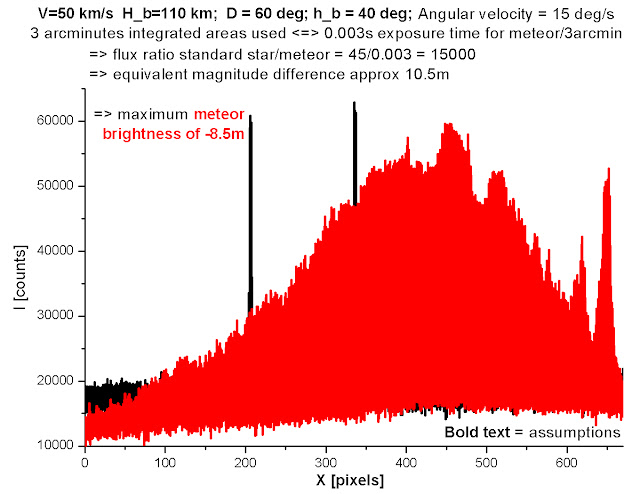 There were other meteors and this is the second (and last) bolide I captured on camera that night. The analysis above cannot be performed though, as the meteor track is saturated and only a minimum magnitude can be obtained in that way.

Venus and the Moon joined the show :) 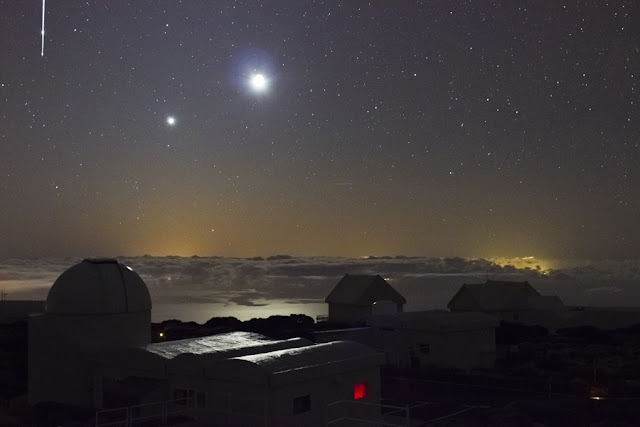 A 100% crop of the meteor captured above. It's kind of wiggly and I wonder if it's a sampling effect or a true physical effect. 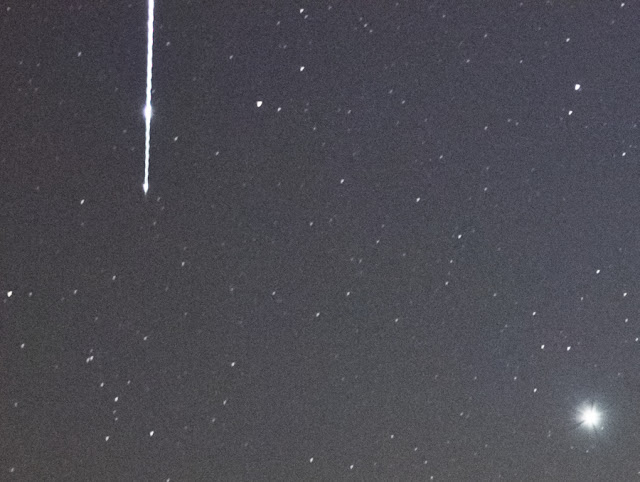